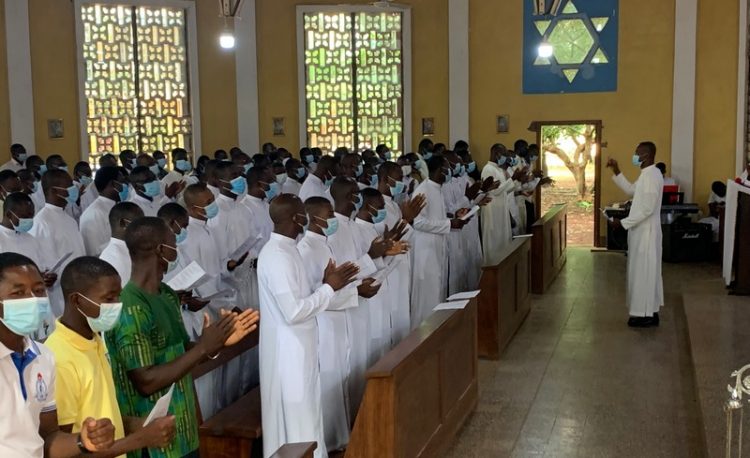 The Bishop of the Catholic Diocese of Yendi, who doubles as the Vice Chairman of the Board of Governors of the St. Victor’s Major Seminary, Tamale, Most Rev. Vincent Sowah Boi-Nai SVD told the Seminarians that ‘life is about taking risk’ and they should not be afraid of doing so. He said this during the reception of cassocks, installation into ministries and the inauguration Mass of the Seminary year at St. Victor’s Major Seminary. The Mass was concelebrated by the Rector , V. Rev.Msgr. Thomas Anamoh  and  other formators of the seminary. Also present were the religious, benefactors and benefactresses, and friends of the seminary.This is an annual programme of the seminary where seminarians from the philosophy to the theology are cassocated, those in theology two (2) are installed as lectors and those in theology three (3) are installed as acolytes. In all 15 theology ones( T1s) were clothed with ecclesiastical garments (cassocks), 23 theology twos( T2s) were instituted as lectors and 15 theology threes( T3s) were instituted as acolytes.

In his homily, he entreated them to use their God giving talents to the service of humanity but not for their personal gain. Again the Prelate encouraged the Seminarians to be opened to their formators so that they can help them be formed according to the heart of Jesus. He bemoaned the Pull Him Down attitude in our society today especially among priests and religious, hence the need not to allow others influence them negatively. Coinciding with the memorial of St. Augustine of Hippo, whom the Bishop calls a Model of conversion, he advised the Seminarians to imitate the shining example of St. Augustine by transforming themselves through an ongoing conversion so that they can serve the Lord in truth and with sincerity. Like St. Augustine, we should search for Jesus and get closer to Him daily.

In the context of the Mass, the Dean of Studies of the St. Victor’s Major Seminary, Very Rev. Fr. Dr. Matthias Mornah gave his Lectio Brevis­—a short lecture meant to give a general academic information for the academic year.

The  Rector  in his welcome address  entreated everybody to bear in mind that we are still in the period of covid-19, hence the safety precautions should be properly observed.